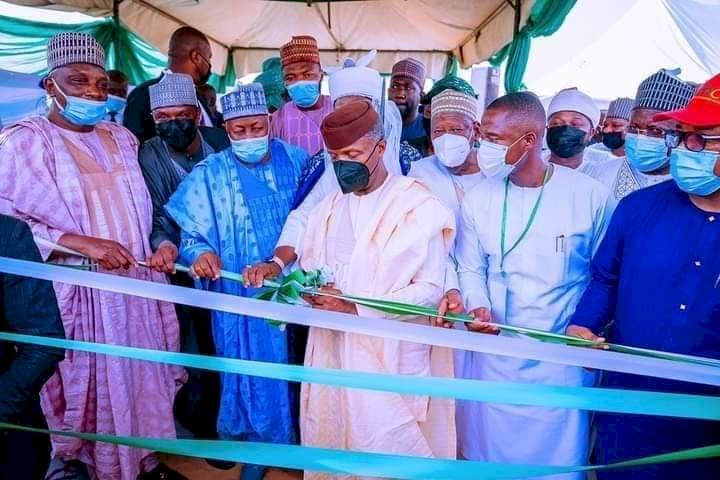 Vice President Professor Yemi Osinbajo has launched solar power connections in Jigawa State as part of the promise of the Federal Government to deliver electricity to about 25mllion Nigerians whose communities are off the grid.

Osinbajo during the launch restated the determination of the President Muhammadu Buhari administration to ensure that millions more will now have access to cheap and environmentally friendly renewable power.

Coming under the Economic Sustainability Plan, Osinbajo said the launch of the Solar Power Naija programme is taking off with the Jangefe Community in Roni Local Government Area (in the Kazaure Emirate) of the State and will get to all geopolitical zones in the country soon.

“After Jangefe, the rollout will continue across the 6 geopolitical zones in Edo, Lagos, Adamawa, Anambra, Kebbi and Plateau. Other Solar companies are also in the pipeline for the Solar Power Naija facility to continue the march to 5 million connections during the life of this administration,” the Vice President said in a statement signed on Saturday by his Senior Special Assistant on Media and Publicity.

He added that the scheme will then go to the entire 36 States and the FCT covering 25million Nigerians in the end.

The Vice President, flagged off the commencement of the installation in Jigawa, in what is part of a 100,000 scheme with A-SOLAR, a local solar power company implementing aspects of the ESP Solar Power Naija scheme.

“The President had emphasised that we could no longer rely solely on the grid if we were to electrify the whole country. Which meant that we had to develop an effective strategy for decentralizing the power supply. Two obvious things to do were, first to think of implementing more off-grid solutions and to use renewable energy especially solar power.

“Another challenge turned opportunity was Covid-19 and our response to the economic fallouts of the pandemic – the Economic Sustainability Plan. A fundamental rationale for the plan was to retain existing jobs and create new jobs. A mass solar programme seemed like a real chance to kill several birds with one stone; electrify the country and in the process, create thousands of jobs from solar assembly and manufacturing plants to installers, payment system operators, and maintenance of solar systems once installed.

“Mr President, therefore, approved the inclusion of what came to be known as the Solar Power Naija programme in the Economic Sustainability Plan which he asked me to chair,” Osinbajo said during the launch.

Osinbajo further stated that the solar power programme is a public-private sector partnership supported by concessionary lending via the Central Bank of Nigeria and commercial banks.