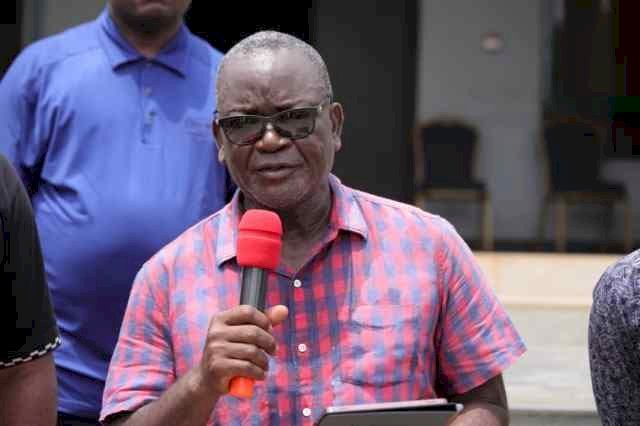 Let me cut to the chase. The story about an attempt to kill Samuel Ortom Adorogo yesterday is getting curiouser and curiouser as Alice in Wonderland would put it. We now have three versions of the same incident, with all three versions coming from the Ortom administration. This is getting embarrassing and some of the emerging details designed to embellish the narratives are casting serious doubts on the entire story.

Version One: Ortom’s motorcade was attacked along the Makurdi-Gboko road. No mention of casualties or property damages. No details on how the attack supposedly took place.

Version Two: Ortom was attacked on his farm. He ran for about 1.5 kilometers to avoid being killed. Ortom knew that his assassins numbered 15 and wore black clothes. He ran as the assassins were approaching him. He recognized his assassins as Fulani herdsmen militias. He knew, through intelligence that he had gathered, that the Fulanis had met in Adamawa State and had taken a decision to eliminate him. Maybe the assassination attempt was the outcome of the Fulani gathering in Adamawa.

Version Three: The Abraham Kwanghngu Version. Kwanghngu is a PSA to Ortom. He was with Ortom and nine of Ortom’s security details when the attack took place. No, Ortom was not attacked on the farm. He was ambushed on his way from the farm to his vehicles parked two kilometers from the farm. He and Ortom ran for a distance of about 1.5 kilometers. At times, they crawled on their hands and knees to avoid the bullets whizzing over their heads. Thank God, none of the bullets hit its target. Neither Ortom nor Kwaghngu sustained scrapes and bruises despite crawling on their hands and knees for an unknown distance of the 1.5 kilometers that they had to flee. Does crawling on hands and knees qualify as running, too? Ortom’s nine security details saved the day. They returned fire for fire and apparently, their superior firepower sent the assassins scampering. No assassin was injured or killed. None was captured. They all escaped on foot. No security detail was harmed, either. Kwanghngu spared us counting how many shots were fired. No details either if the police have visited the crime scene and have collected shells of the spent bullets for forensic analysis.

We have been asked to take our pick. We have one crime and three crime scenes: the Makurdi-Gboko road at Tyo-Mu, Ortom’s farm at Tyo-Mu, and a stretch of road between the farm and the highway. Some of these versions are downright incredible. They tax our brains and stretch our credulity. It is tempting to dismiss all three, but we cannot do so. Ortom is an honorable man. Kwanghngu is an unknown quantity. We cannot take his words over Ortom’s words. Ortom is the governor. Kwanghngu is just a principal special assistant. You can call him Vice-Chancellor Special Assistant. He remains a mere assistant. His version that they were ambushed and that they had to crawl on their hands and knees is infinitely more dramatic and more creative. Nollywood moviemakers would definitely choose his version over all others. His version did not include a head count of the assassins, but again, he is just an assistant who might not pay close attention to details. Is Kwanghngu selling us a bill of goods? Maybe, but I prefer creative bill of goods.

Honestly, I do not know what to make of the story anymore. Should I thank Egberume for saving Ortom from an attack on his convoy? Or saving him from an attack on his farm? Or saving Ortom from an ambush on his way from his farm? And oh, are the two kilometers between his farm and the highway not motorable or Ortom prefers the exercise of walking those two kilometers even as he exposes himself to potential assassins?

By the way, Ortom had nine, yes, nine security details who accompanied him to the farm and none of these men foresaw the possibility that Ortom walking two kilometers to and from his packed vehicles presents a very soft target to would-be assassins? Particularly in a place like Tyo-Mu that witnessed violent bloodletting not too long ago and over which there is a very serious land dispute? Why are Ortom and the ethanol company buying huge chunks of land in a place where disputes over land have led to the killing of five people and substantial property damage? What was the ethanol company apologizing to Ortom for two weeks earlier? What corners did it cut and why was it let go with a simple apology?

Agbese, a professor at the University of Northern IOWA wrote from USA.

Why is it that we have prominent Fulbe across the globe but our people are been...