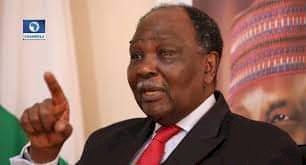 Yakubu Gowon, a former military head of state, has described allegations that he looted half of the Central Bank of Nigeria as “rubbish”.

Tom Tugendhat, a member of the United Kingdom parliament, had accused Gowon of looting Nigeria’s treasury when he left office.

Speaking at the UK parliament committee debate on a petition on the #EndSARS crisis, Tugendhat had urged the UK to call out corruption and use its powers to stop who profit from Nigeria’s wealth and hide it in foreign countries.

“Some people will remember when General Gowon left Nigeria with half of the Central Bank, so it is said, and moved to London,” he said.

However, Tugendhat did not provide any evidence to support his claim.

In reaction to the remark, Gowon told BBC: “I don’t know where he got that rubbish from, I served Nigeria diligently and my records are there for all to see”.

“What the MP said was just mere ridicule and I don’t know as to where he cooked up such statement. I served Nigeria as much as I could and my achievements during those years are available to everyone.

“I don’t want to talk over the matter since those who know me very well say that the MP’s statement is nothing but a mere fallacy”.

Gowon was Nigeria’s military head of state from 1966 to 1975, including during the time of the oil boom.

After leaving power in 1975, Gowon went to the UK to study political science and international relations as an undergraduate at Warwick University.

Several people including Akinwumi Adesina, president of the African Development Bank (AfDB), have reacted to the claim vouching for Gowon’s integrity.

Be careful of misinformation! H.E. General Yakubu Gowon, Nigeria’s former Head of State, is a man of great honour, decency, honesty, amazing simplicity, humility and integrity. I know him. A great and admirable elder statesman of Nigeria. His honesty and integrity are impeccable. pic.twitter.com/YznYN873qH

Whatever you may say or feel about General Yakubu Gowon it is NOT true that he took half of Central Bank with him when he went on exile to the UK & studied at Warwick University after being removed in a coup by General Murtala Mohammed. I have my views about Gowon and what..1/6 pic.twitter.com/jIu8eVq8Pl

Gowon was removed in a coup while attending an OAU event in Kampala, Uganda. He had neither the logistics to escape with Nigeria’s money, nor had the exact foreknowledge of the coup. Believing that nonsense from the UK parliament that he ran with half of the CBN makes one cringe.

General Yakubu Gowon;The claim of ‘looting the CBN’ made by the British Minister for Africa as represented by Mr James Duddridge against Gen Gowon is nothing but outright falsehood.Gowon exited power without any evidence of wealth & that remains,for over four decades after power.

@TomTugendhat should tender an apology already or supply evidence of what he alleged. How would it sound if Nigerian legislator said same of Thatcher? We have had bad eggs in leadership but he mustn't paint us all robbers.