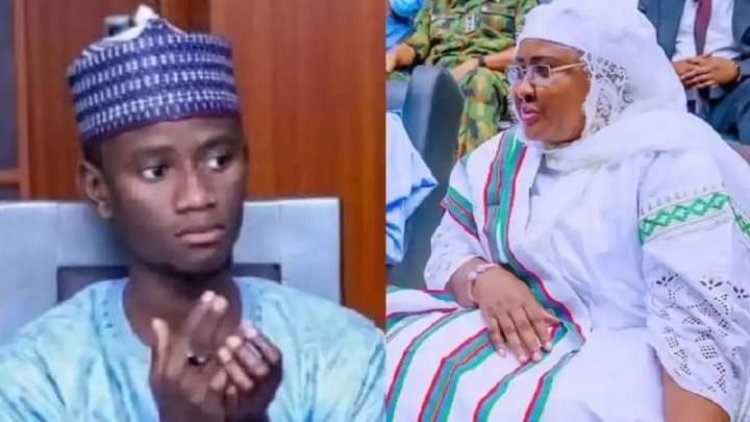 Aminu Mohammed and Aisha Buhari
Following his release from prison, a final year student of the Federal University, Dutse, Aminu Mohammed, has apologized to the first lady, Aisha Buhari, for “hurting” her.

In a tweet he posted after arriving at school on Saturday night, Mr Mohammed regretted his tweet against the first lady, saying he would change for the better.

“I would like to use this medium to express my sincere apologies to those I’ve hurt especially our mother, Aisha Buhari it was never my intention to hurt your feelings and insha Allah I will change for the better. However, I’m also grateful for your forgiveness, thank u mama.

“I would also like to use this medium to express my heartfelt gratitude toward those that helped me go through the darkest hours of my life, man cannot escape his destiny but my incidence should serve as a lesson to all of us. Thank you all and one love,” he posted.

Mr Muhammed, who was subjected to torture and other ill-treatment, including severe beatings, had faced charges of defamation of the character of the First Lady of Nigeria over a tweet.

In the ‘offensive’ tweet, Mr Mohammed posted the picture of the first lady, in which she appeared fat, saying she fed fat on public funds.

According to a police report, Mr Muhammed was arrested at Federal University Dutse on November 18, 2022 after Mrs Buhari instructed a team of police detectives to track him down.

He was then held in an unknown location and denied access to his family and lawyer, in clear violation of international human rights law.

On Friday, Mrs Buhari bowed to widespread pressure and condemnation to withdraw the case against the student.