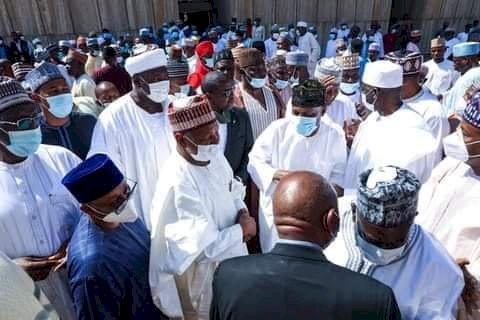 The late former federal lawmaker, who  was also one of the Kebbi State Governorship aspirants in the 2015 election died in the early hours of Tuesday, 8th December, 2020, at his residence located at 6 Sabo Ago Avenue, Life Camp Abuja, following a protracted illness.

The funeral prayer which took place at the National Mosque, Abuja, was well attended by top government functionaries, serving and retired, former Governors, Ministers and politicians, amongst who were National Assembly members, as well as friends and well wishers from Kebbi State and beyond.

The late Muhammadu Sani Umar Kalgo was born on the 15th of May, 1950, in Kalgo Local Government area of Kebbi State.

He is survived by one wife and five children, amongst whom is the incumbent Commissioner for Budget and Economic Planning, Dr.Abba Sani Kalgo