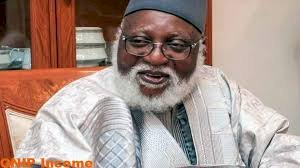 General Abdulsalami Abubakar (Born June 13, 1942) is a Nigerian statesman and military general who served as the de facto President of Nigeria from 1998 to 1999.

He was also Chief of Defence Staff between 1993 to 1998. He succeeded General Sani Abacha upon his death.During his leadership, Nigeria adopted a modified version of the 1979 constitution, which provided for multiparty elections. He transferred power to president-elect Olusegun Obasanjo on 29 May 1999. He is the current Chairman of the National Peace Committee.Early life Abubakar was born on 13 June 1942 to his father Abubakar Jibrin and his mother Fatikande Mohammed, in Minna, Niger State, Nigeria.

From 1950-1956 he attended Minna Native Authority Primary school. From 1957-1962, he had his secondary school education at Government College, Bida, Niger state. From January to October 1963 he studied at Kaduna Technical College. Military career Air force career Abubakar is a member of the pioneering sets of officer cadets who enlisted into the Nigerian Air force on 3 October 1963. From 1964- 1966, he was flown to Uetersen, West Germany with a team of officer cadets, for Basic and Advance Military Training. When he returned to Nigeria in 1966 he was seconded to the Nigeria Army.

Army careerAfter joining the army in 1966 as an officer cadet, Abubakar attended the emergency combatant short service course two. In October 1967, Abubakar was commissioned second lieutenant, infantry division, Nigerian army. From 1967-1968, Abubakar was general staff officer two, second garrison, and commanding officer, 92 infantry battalion from 1969-1974. Between 1974 and 1975, he was made brigade major, 7th infantry brigade. In 1975 he served as commanding officer, 84 infantry battalion.

In 1978-1979, Abubakar was commanding officer for the 145 infantry battalion (NIBATT II), United Nations Interim force, Lebanon.In 1979 he was made assistant adjutant general 3rd Infantry division, Nigeria. From 1980-1982, Abubakar was chief instructor at the Nigerian Defence Academy. In 1982 he was appointed as the colonel of administration and quartering, 1st mechanised division. A position he held up until 1984. From 1985-1986, Abubakar was the commander 3rd mechanised brigade.

He served as the military secretary of the army, 1986–1988. Abubakar was made general officer commanding 1st mechanised division 1990-1991. Between 1991-1993, he was the principal staff officer, as the army chief of plan and policy, Defence Headquarters.From 1993-1998, General Sani Abacha appointed Abubakar as the Chief of Defence Staff. Upon Abacha’s death on 8 June 1998, Abubakar took power as the military president of Nigeria and Commander in Chief of the Armed Forces on 9 June 1998.Presidency Military Nigeria had been ruled by military leaders since Muhammadu Buhari seized power from Shehu Shagari in a 1983 coup.

Although democratic elections had been held in 1993, they were annulled by General Ibrahim Babangida. Reported to have had an initial reluctance to accepting the position, Abubakar was sworn in as president on 9 June 1998 after the unexpected death of Abacha. He declared a weeklong period of national mourning.

The INEC held a series of elections first for Local Government Areas in December 1998, then for State Assemblies and Governors, National Assemblies and finally for the President on 27 February 1999. Although efforts were made to ensure that the elections were free and fair, there were widespread irregularities that drew criticism from foreign observers.

Transfer of power Surprising some critics of the country’s military, In May 1999 General Abubakar, handed over power to the newly elected civilian president, Olusegun Obasanjo and retired from the army.

It’s very happy 78th birthday Anniversary to General Abdulsalami Abubakar a statesman and one without which the history of our Nigerian democracy would be incomplete.

I celebrate you today even for your efforts in further enhancing our democracy via the National Peace Committee. Happy birthday Legend and Best wishes Amen.

Former Emir of Kano, Sanusi Lamido Sanusi, is returning to school in the United...