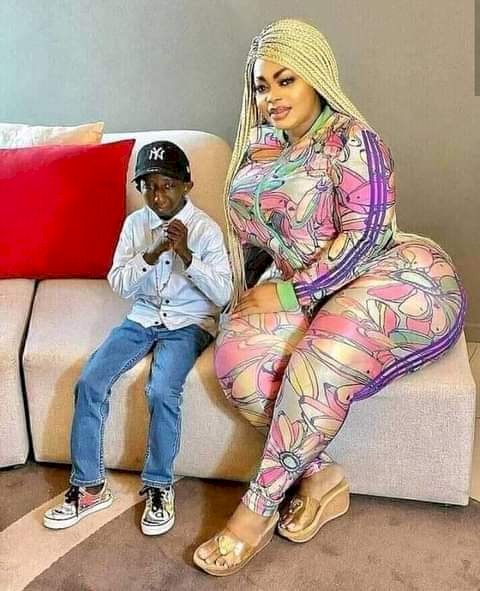 There has been serious debate about the viral pictures of a "big" woman and a "small" man who are said to be love birds.People all over the social media have been criticizing the couple due to their deference in body stature.

Grand P is a Guinea citizen whose real name is Maussa Sandiana Kaba.He was born with progeria, an extremely rare genetic disorder that has affected his height.
Maussa is singer and an actor who has been laughed at and marginalize due to his body physical stature.He recently signed a contract with major American production where he collected a lot of money from his films and movie.
Grand p has become very popular in his country, he was even chosen to lead and support his country's delegation in Cairo Egypt.Grand p has caused stir in the social media after posting his newly engaged girlfriend on his Facebook page. Her girlfriend by the name Eudoxie Yao is an Ivorian model and celebrity.She is an Instagram model who often flaunts pictures of a big body. Exdoxie wrote on her Instagram "We are happy together, and this is the most important thing.”

‘Thank you, everyone for your support.”

“The Physical does not count in a relationship.”