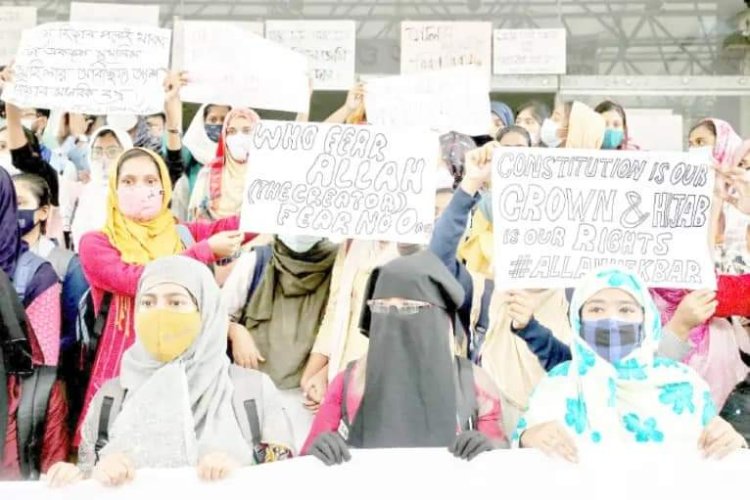 An Indian state has shut high schools and colleges for three days, after a row over Muslim women wearing hijab in the classroom that has gained international attention.

The government of Karnataka state took the decision after protests by students over the hijab escalated into violence.

A judge at the state’s high court referred petitions challenging the ban to a larger panel.

Protests have now spread across the country.

Hundreds of people demonstrated against the ban in Kolkata and Chennai, two of India’s largest cities, and in Hyderabad. And the Pakistani government summoned the Indian ambassador to formally convey its concern.

The decision to close the schools and colleges in the southern Indian state came after protests by six teenage students at a government-run college over wearing hijabs spread to other colleges.

On Tuesday, Nobel Prize-winner Malala Yousafzai, who was 15 when she survived an attack by the Taliban in Pakistan for speaking up for the right of girls to be educated, weighed in. She called on India’s leaders to do something to “stop the marginalisation of Muslim women”.

In India, the stand-off has increased fear and anger among minority Muslims, who said the country’s constitution grants them the freedom to wear what they want.

The issue began gaining attention when the students at the pre-university college – equivalent to a high school – in Karnataka’s Udupi district began protesting over the hijab ban.

The college said it allowed students to wear the hijab on campus and only asked them to take it off inside the classroom. But the protesters – who all wear the mandatory college uniform – argued they should also be allowed to cover their hair in the classroom. (BBC)