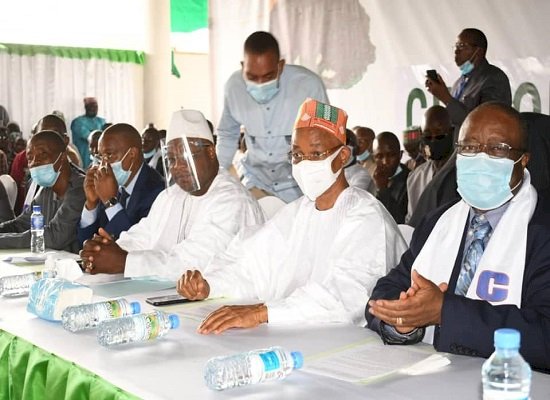 The Union of Democratic Forces of Guinea (UFDG) and the National Alliance for Alternation and Democracy (ANAD) have planned to hold a demonstration on Tuesday, the day of the inauguration of President Alpha Condé.  Kéamou Bogola Haba, one of the ANAD officials, says it is out of the question for Cellou Dalein Diallo and his allies to let their guard down.

`` Our only activity is to demonstrate that it is a coup d'etat that is being prepared on the side of the Mohamed 5 palace and that the chosen one is in Dixinn '', indicates the executive secretary of the National Union  for alternation and democracy.

He specifies that "the struggle we are waging, we will continue it whatever the weather, the repression, the number of prisoners and the number of deaths.  If we give up on this fight, it means that the alternation no longer makes sense ".

Bogola Haba recalls that Dalein accepted the results of the presidential elections of 2010 and 2015 to favor peace in Guinea.  "By continuing like this, he is hurting justice, the right to vote, the alternation, the new generation.  That’s why we told him not to accept it, ”he says.

"By accepting the results of the presidential election, he will have hurt all of us (...).  We would have damaged democracy.  It will no longer make sense to go to an election in Guinea, ’’ said Dalein's ally.

Despite the ban on demonstrations, he says the UFDG-ANAD couple on the occasion of the inauguration of the head of state.  “Whatever the cost, we stand by our protest (…).  Alpha Condé is not the president of Guinea, it is a coup that he is doing, ’’ he told anyone who will listen.

“The vote is the only weapon Guineans have to sanction those in power.  This vote must be respected.  We are not fighting for Cellou.  We are fighting to ensure that citizens' votes are respected, ’’ Eye of the Lynx said.