2023: Intersociety Alerts US, Canada, UK, EU, Others ; Tells Them To Monitor Tinubu, Atiku, Obi, Others The Int’l Society for Civil Liberties and Rule of Law (Intersociety) has warned the Presidential Candidates of the ruling All Progressives Congress (APC), Mr Bola Ahmed Tinubu, the Peoples’ Democratic Party (PDP), Mr Atiku Abubakar, the Labour Party (LP), Mr Peter Obi and others to stay clear of ‘direct or indirect sponsorship of pre-election and election violence or aiding and abetting of same.’

Intersociety gave this warning in a press statement in Onitsha, Eastern Nigeria on Thursday, June 16, 2022 signed by its Board Chairman, Emeka Umeagbalasi; Head, Democracy and Good Governance, Chinwe Umeche Esquire and Head, Campaign and Publicity, Chidimma Udegbunam Esquire and subsequently charged the presidential aspirants to prohibit their supporters from attacking citizens wanting to register or obtain their Permanent Voters Cards (PCV).

The statement reads: “The Int’l Society for Civil Liberties and Rule of Law (Intersociety) is seriously warning the Presidential Candidates of the APC, Mr. Ahmed Bola Tinubu and the PDP, Mr. Atiku Abubakar to shun and desist from direct or indirect sponsorship of pre election and election violence or aiding and abetting of same. The two Candidates who are members of the Nigeria’s Muslim faith religion and frontline Candidates in the next year’s Presidential Election must discourage and prevent their supporters from being directly or indirectly associated with coordinated and sustained attacks on PVC registrants especially targeted at members of the Igbo Trado-Judeo-Christian faith who are of voting age as well as non Igbo Christian others. Not left out in our advocacy warning are Mr. Peter Gregory Obi, another leading Candidate from the Labor Party as well as other Presidential Candidates. Intersociety’s informed and timely warning also goes to the country’s sectionalized and Muslim dominated security chiefs. They must desist from partisanship and being protective of the tribal-religious violence against Christian PVC registrants. The warned above must be mindful of the fact that the 2023 Presidential Election is a tsetse fly on the scrotum and therefore beyond direct or indirect sponsorship of tribal-religious attacks on PVC registrants in Lagos and Northern Nigeria.”

The group said that in contrast with the 2019 presidential elections where ‘thuggery, fanaticism and barrels of gun’ were used to ‘frighten and terrorize the Trado-Judeo-Christian Igbo citizens and non-Igbo Christian others’, the upcoming elections in 2023, is ‘revolutionary and a ‘political virus system cleanser’ by a formidable and un-purchasable mass of revolutionary voters cutting across religious, ethnic, gender and class divides.’

The statement reads further: “As a tsetse fly on the scrotum, carefulness and neutrality of approach are strictly required in severing same from the scrotum so as to avoid smashing the scrotum and killing its human bearer. In other words, the 2023 Presidential Poll in Nigeria will not be same as that of 2019 when thuggery, fanaticism and barrels of gun were deployed in industrial scale especially in Lagos State and Northern Nigeria to frighten and terrorize the Trado-Judeo-Christian Igbo citizens and non-Igbo Christian others. Unlike in the 2019 Presidential Poll, the 2023 Presidential Election is revolutionary and a ‘political virus system cleanser’ by a formidable and un-purchasable mass of revolutionary voters cutting across religious, ethnic, gender and class divides. The 2023 Presidential Poll is also beyond ‘Gerontocratic sponsorship of tribal-religious electoral violence’.”

Intersociety also drew attention to its detailed report of the 2019 presidential elections and its ‘anti-Igbo-Christian electoral mayhem in Lagos and Northern Nigeria’, resulting in loss of lives and properties in Lagos and dominant Igbo residential areas’ of northern Nigeria and said that recently, there have been ‘reports of thuggish and fanatical attacks on Christian PVC registrants.’

“Intersociety had in its detailed report of the 2019 Presidential Poll Violence found that the camp of Senator Ahmed Tinubu to have remotely engineered the attacks on Igbo voters in Lagos State. The former Senator was also quoted in several social communication quarters making some inflammatory comments against members of the Igbo Ethnic Nationality resident in Lagos State including threatening and ordering them to vote for APC’s Governorship and Presidential Candidates in return for safety of their lives and properties. The unspeakable human and property violence was also unleashed on them and at the polling centers located in their dominant residential areas and this was executed using the Lagos street urchins called “Alaye or Area Boys”. The attacks led to burning of houses and properties belonging to Igbo natives and INEC’s polling centers. Scores of Igbo natives were also killed or injured in the attacks. Igbo voters were also egregiously targeted and attacked, frightened and terrorized in dominant Igbo residential areas of Kano, Borno, Adamawa, Taraba, Plateau, Sokoto, Kaduna, Nasarawa, Kogi and other key Igbo residential areas in Northern Nigeria. Shops belonging to them were forced to be closed for weeks and some properties belonging to them attacked or destroyed.

“There have been series of credible media and eyewitness reports of resurgence of targeted, coordinated and sustained attacks on Igbo and non-Igbo Christian PVC registrants in Lagos State and various Christian held areas of Northern Nigeria. While Lagos street urchins (“Alaye or Area Boys”) are used to launch the attacks in Lagos, Muslim fanatics including “Almajirai” (abandoned and radical Islamic street teenagers between four and seventeen years) are politically deployed for the attacks in the North. Such attacks have recently resurfaced targeting PVC registrants in Igbo and Christian held areas of Lagos State and their likes in the FCT, Zamfara, Sokoto, Kano and others. The overall aim of the attacks, attackers and their sponsors is to frighten the mass of PVC registrants so as to scare them away, frighten, terrorize and massively disenfranchise them; all geared towards preventing them from voting in the all-important Presidential Election of 2023. Their sponsors are also those afraid of allowing a level playing ground to test their popularity or otherwise in the forthcoming 2023 Presidential Election and desperately bidding to rule the country not through credible and popular ‘one-person-one-vote’ but by way of robotic and crooked electoral means secured through thuggery and barrels of gun’,” the statement further reads.

Intersociety also called on all Presidential candidates to ‘champion the campaign for CVR exercise and digital voting’ by issuing ‘a joint statement urging all Nigerians of voting age presently not with PVCs to massively go to INEC registration centers to register or obtain their PVCs.’

The three leading Presidential Candidates: Mr. Ahmed Bola Tinubu, a Southwest Muslim Presidential Candidate of the APC; Mr. Atiku Abubakar, a Northeast Muslim Candidate of the PDP; and Mr. Peter Obi; a Southeast Christian Candidate of the Labor Party and others must openly shun violence and champion campaign for Continuous Voters Registration exercise and use of side-by-side electronic and manual voting in the 2023 Presidential Election and its auxiliaries. The Candidates must also specifically encourage all Nigerians of voting age who have not obtained their PVCs or those with lost PVCs or those seeking to transfer theirs; irrespective of their age, gender, class, ethnicity, religion and geographical location to have their PVCs possessed with ease. None of the leading three Candidates must again be allowed to directly or indirectly sponsor or aid or abet electoral violence including frightening and terrorizing by proxy violent entities citizens seeking to obtain their PVCs. As a matter of fact, the Candidates shall issue a joint statement urging all Nigerians of voting age presently not with PVCs to massively go to INEC registration centers to register or obtain their PVCs. Since INEC still legally has over seven months to CVR deadline, the three leading Candidates and others shall jointly or separately call on the Commission to officially and publicly extend the CVR exercise for at least two months or August 2022 and ensure that its online portals are accessed without hitches by online voters’ card registrants.  The remaining five months or Sept 2022 to January 2023 will be enough for the Commission to clean up, update, print and issue registered voters who have not obtained their PVCs with same. The 2023 Presidential Candidates, security chiefs and INEC must be reminded unmistakably that rights to vote or be voted by every citizen of Nigeria of voting age is a fundamental human right dutifully and justiciably protected by the country’s Constitution and relevant int’l rights instruments including the African Charter and the Int’l Covenant on Civil and Political Rights of 1981 and 1976 respectively”, the group stated.

In conclusion, Intersociety called on the United States (US), Canada, United Kingdom (UK), member states of the European Union (EU) and others to ‘keep their eyes open’ and strictly monitor the ongoing political activities in the country so at to sanction defaulters accordingly.

“The Int’l Society for Civil Liberties and Rule of Law hereby call upon the influential and powerful international actors especially the Governments of US, UK, Canada and Member-States of the European Union and others to strictly keep their eyes open. Their international economic, political and diplomatic attentions are specifically drawn to the coordinated and sustained attacks on PVC registrants by third party violent supporters of some leading Candidates. It is the moral duty of the above named international actors as the critical partners in the country’s electoral process to ensure that all the citizens of voting age irrespective of their age, gender, class, religion, ethnicity and geographical location are encouraged and protected to actively participate in the 2023 General Elections especially the Presidential Poll. Their encouragement and protection to participate must start from obtainment of the Permanent Voters’ Cards to the Election Day voting. The International Actors are further called upon to strictly monitor the ongoing political activities of the above named three Presidential Candidates and others so as to ensure their civil conducts and being compelled to refrain from direct or indirect sponsorship of electoral violence in the ongoing CVR exercise and during the conduct of the 2023 Presidential Poll. Any of the leading Candidates found to be directly or indirectly involved or aiding and abetting any form of pre electoral or electoral violence must be sanctioned including being denied entry or exchange visas or seizure of their offshore assets or properties; and/or made to be referred to the ICC for criminal trial and punishment for crimes against humanity under the mandates of the United Nations and the Int’l Criminal Court.” 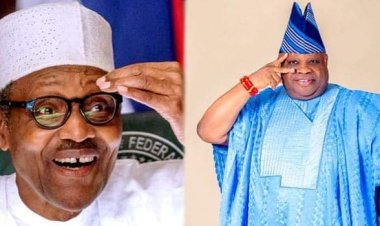 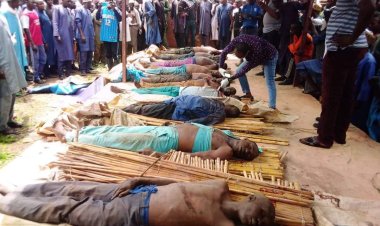 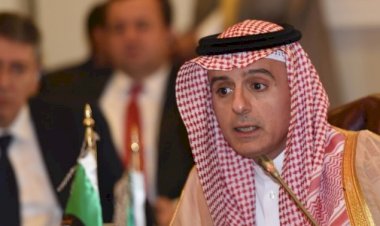 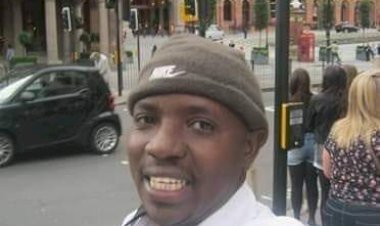 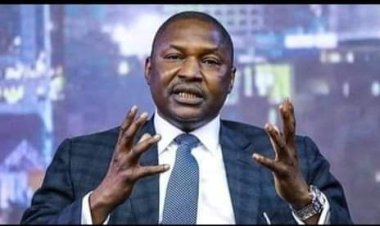