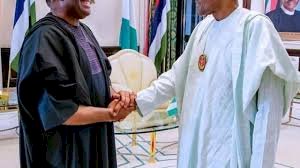 The Peoples Democratic Party (PDP), its vice presidential candidate in the 2019 election, Peter Obi and a former Deputy Senate President Ike Ekweremadu joined in celebrating the re-election of one time Minister of Agriculture.

They attributed Adesina’s triumph to his unfettered love for Africa; pragmatic leadership and the confidence reposed in him by the bank’s shareholders and management.

Adesina was re-elected with 100 per cent votes of all regional and non-regional members of the bank for another five years at their Annual General Meeting (AGM) held virtually in Abidjan Cote d’Ivoire.

The Chairperson of the Board of Governors of AfDB, Mrs. Niale Kaba, announced his re-election.

“As shareholders, we strongly support the bank and we will give him all the necessary support to carry forward and implement his compelling vision for the bank over the next five years,” Kaba said.

The former minister was first elected President of the bank May 28, 2015 and would begin his new term September 1.

The President, who sent his congratulatory message on behalf of the Federal Government and all Nigerians, said he received news of victory in the middle the National Council of State meeting at the State House, Abuja.

Buhari, in a statement by his Special Adviser on Media and Publicity, Femi Adesina, said: “On behalf of the Federal Government and entire people of Nigeria, I felicitate with Adesina on his re-election for a second term in office. He deserves it and Nigeria and Africa are honoured by the victory which is a testimony to his hard work and commitment to the development of the continent.” .

The President thanked the African Union (AU), the bank’s shareholders and the international community who worked tirelessly to ensure Adesina’s victory.

He challenged the bank’s boss to remain focused and steadfast in pursuing the noble goals of making life better for Africans through various development plans, already captured as High 5s.

While Lawan said that the victory affirms the confidence and trust of the shareholders of the bank on Adesina, Gbajabiamila attributed it to his integrity and dedication to duty.

“I am elated to convey the joy and pride of the entire National Assembly over the electoral acclamation for integrity, grace, substance and hard work,” Lawan added in a statement by his Special Adviser (Media), Ola Awoniyi.

The Senate President advised Adesina to see his victory as an “impetus for taking the continental financial institution to a greater height.”

Gbajabiamila on his part, challenged the AfDB boss to view his “clearance by the independent review panel and the ethics committee of the bank as well as the bank’s Board of Governors’ independent review panel as an affirmation of your integrity, dedication to duty and diligence.”
In his congratulatory Fayemi said the people of Ekiti State and himself were highly elated by Adesina’s “well-deserved” re-election.

“This is great news for all lovers of development. It is a befitting reward for Dr Adesina’s visionary leadership which has increased the growth and influence of the bank these past few years,” he said in a statement by his Chief Press Secretary, Yinka Oyebode.

Fayemi, who is the Chairman, Nigeria Governors’ Forum (NGF), described Adesina’s re-election an attestation to his dynamic and pragmatic leadership.

He assured that with Adesina’s pedigree as a thoroughbred professional and a man of distinction, he had no doubt “ that AfDB will make more significant progress, impact more economies and help build a more prosperous African continent, during this second term.”

Fayemi’s counterpart in Lagos, Mr. Sanwo-Olu, said Adesina deserved re-election because he distinguished himself during his first term in office.

The governor commended President Buhari and those who played crucial roles in the victory of the former minister.

Sanwo-Olu, in a statement by his Chief Press Secretary, Mr. Gboyega Akosile, said Adesina’s re-election is a testimony to his hard work, dedication and commitment to the growth and development of the Africa continent.

The governor, who described the former minister as a good ambassador of Nigeria and Africa, said he was confident that his re-election would bring more development to Africa.

In Abuja, the PDP joined in celebrating Adesina’s victory, saying his “re-election was not only earned but also well-deserved in view of the competence and commitment he displayed in uplifting and promoting the bank’s operations since 2015, when he was first elected.”

“Dr. Adesina has attracted praises in bringing his deep knowledge in economic development to bear on the bank’s primary functions of making loans and equity investments for the socio-economic advancement of Regional Member Countries (RMC), the party added in a statement by its spokesman, Kola Ologbondiyan.

It noted that “Adesina had remained a good Ambassador of Nigeria in his display of high level of discipline, professionalism and utmost diligence in the discharge of his duties at the AfDB.”

The party noted that Adesina’s high potential was first brought to limelight when he was appointed in 2010 by President Goodluck Jonathan as minister of Agriculture.

Also Obi, a former governor of Anambra State, described Adesina’s re-election was “a huge blessing to Nigeria and Africa in general.”

“This second tenure obviously gives him the opportunity and the platform to greatly change the economic environment of Africa for the better,” the former governor stated.

Reminding Adesina of the economic challenges facing the world, especially Africa, as occasioned by the global pandemic, Obi urged him to give in his best in ensuring that Africa’s economy was revived and a greater percentage of Africas’ poor moved out of poverty.

Ekweremadu, who was a former speaker of the Parliament of the Economic Community of West African States (ECOWAS) Parliament, described Adesina’s re-election as “a landmark victory, not only for Nigeria, but for Africa as a whole.”

“Your reelection is a vindication for your character, competence and a well-deserved reward for all the successes and spectacular progress the AfDB has made under your leadership,” he said.

The former deputy senate president commended “President Buhari and the people of Nigeria for the leadership and solidarity shown in your (Adesina) matter”.